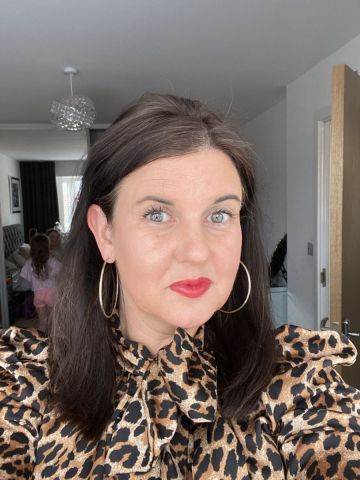 This is my 22nd year in teaching, and my second year at Buglawton Primary School! I live in Sandbach with my husband, 7-year-old daughter and our 12-year-old Springer Spaniel called Henry. I enjoy spending time with my family and friends and going on holiday whenever I can.

Our teaching team this year is myself (Mrs. Chapman) and Mrs. Banks (Teaching Assistant).

IMPORTANT - If you are off school due to illness or isolation, then our school learning will be available on Google Classroom. However, we have noticed that a few parents are not part of this system, so will be unable to access the work at the moment.

Please click on the PowerPoint presentation in File Manager to see about life in Year 5. If you have any questions this year and are unable to speak to me, you are welcome to email. My address is: L.chapman@buglawton.cheshire.sch.uk

The children have a slip in their reading diaries to show which group they're in. Spellings will be checked each Friday and continually in their work. These spellings will also be added and ready to use every Monday on Spelling Shed.

Some children will have individual spelling lists

The winning hive was: GREEN 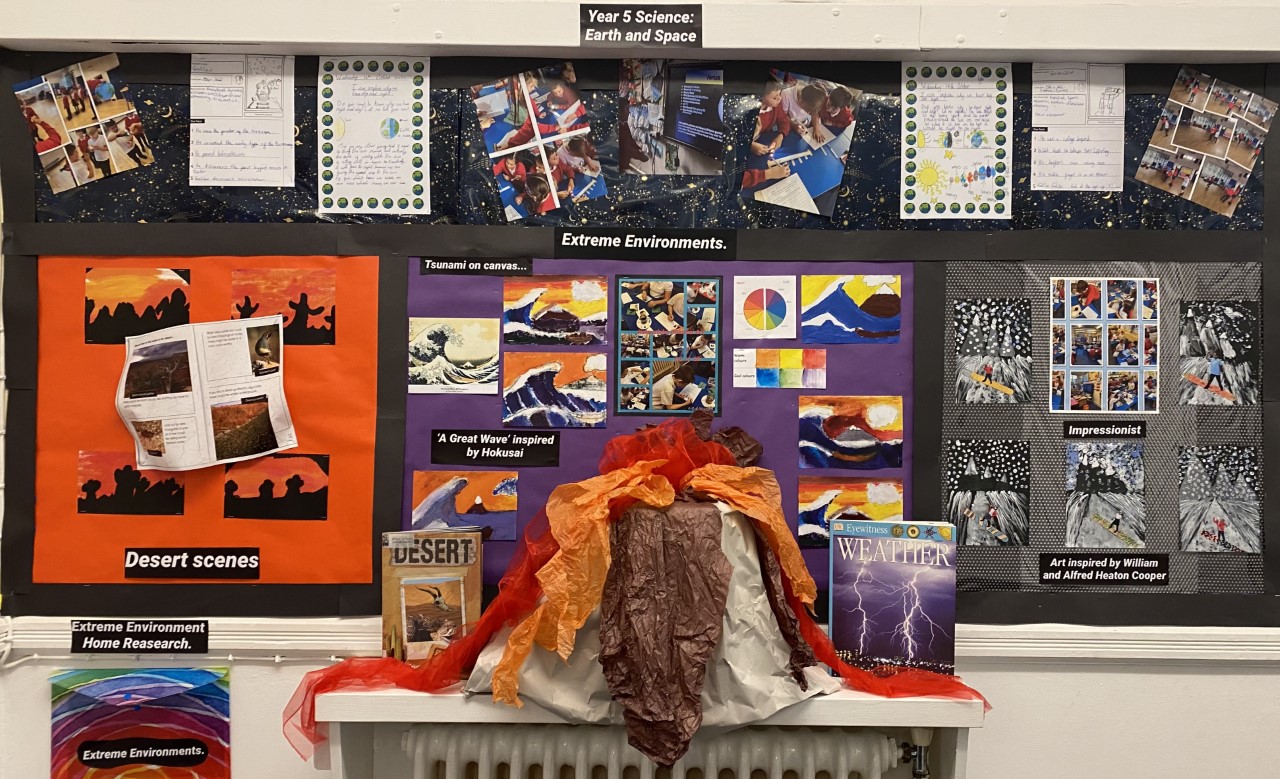 We have created a display outside the Year 5 classroom, in the corridor. This shows work that the pupils have created about Extreme Environments. The children are very proud of their work.

Mrs Lwin has taught Literacy this week. The children are learning how to write a non-chronological report and they are using their knowledge of Earth and Space to help them. These will be completed next week.

The last two weeks of the term's focus is Area and Perimeter. So far the children have been accurately been measuring in centimetres and millimetres and finding the perimeters of different shapes.

We have completed our Science fiction narratives using War of the Worlds, listening to music, and watching some of the musical. The pupils have also written an independent piece of writing using a picture of Father Christmas in his workshop. Next week we will use the War of the Worlds to create a newspaper article.

The pupils are all working on multiplication and division. It is important that they know these times tables, so please use Times Table Rockstars as regularly as possible. 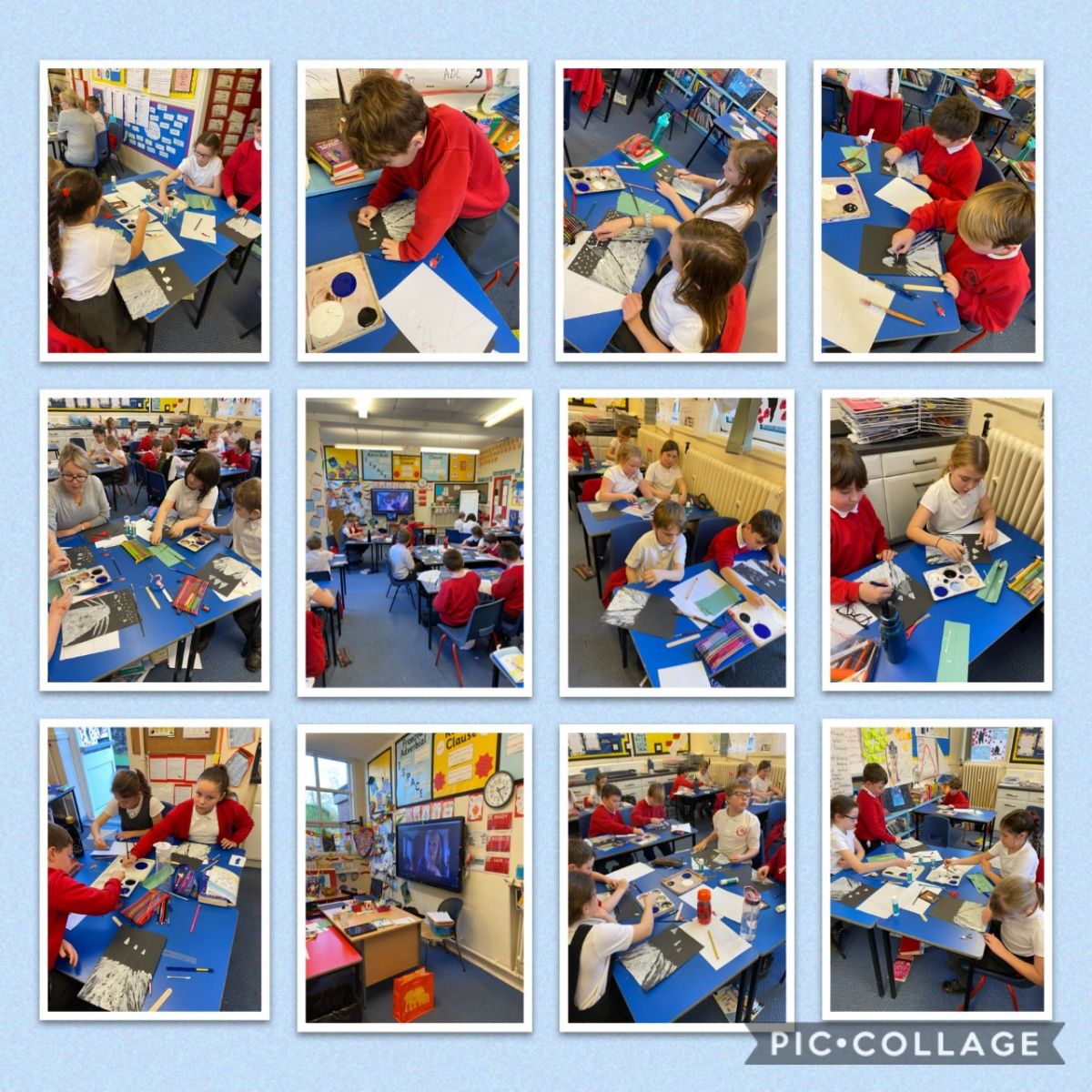 This week we have focussed on our planning. We are intending to write a Science Fiction narrative next week. The plan helps to collate out ideas and use the learning that has been taught so far.

We have learned about square and cube numbers. Ask your child what the answers are to 2 cubed and 2 squared.

Monday saw Year 5 wearing 'Odd Socks' for anti-bullying. Mr. Jervis gave an assembly on this and we worked on some activities within the classroom.

In Literacy this week, we focussed on Spelling, punctuation, and grammar. The pupils now know what parenthesis is, onomatopoeia, and how to use them within their writing.

Most pupils in the class are working on the topic of Multiplication and Division. They have learned vocabulary like multiples, factors and prime numbers. Keep practicing times tables as much as possible!

We have now completed the topic of Earth and Space. The children have completed little quizzes to see how much they know. They have all made progress! The new topic is Forces and this will begin next week.

We are learning about rhythm and pulse and began our lesson exploring instruments and comparing tuned and untuned instruments. The children loved this! 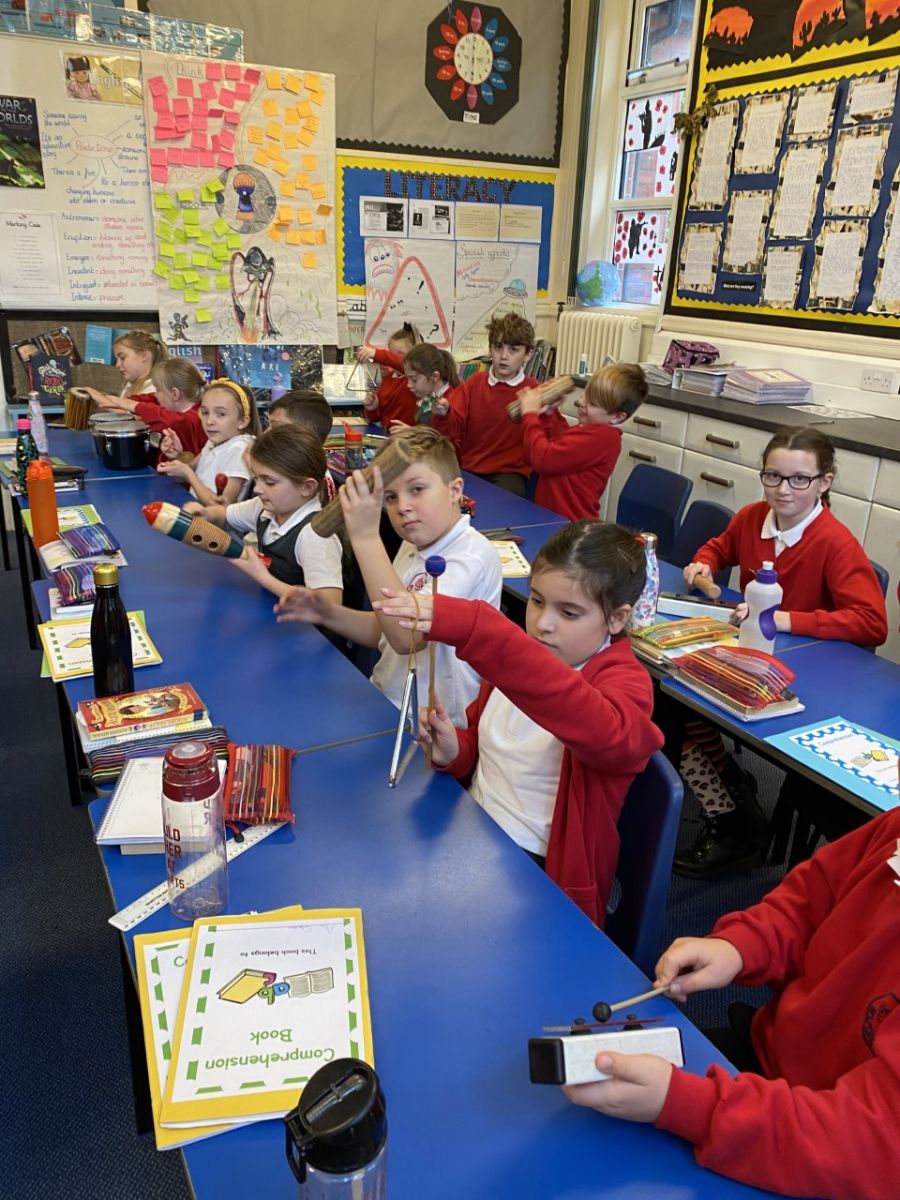 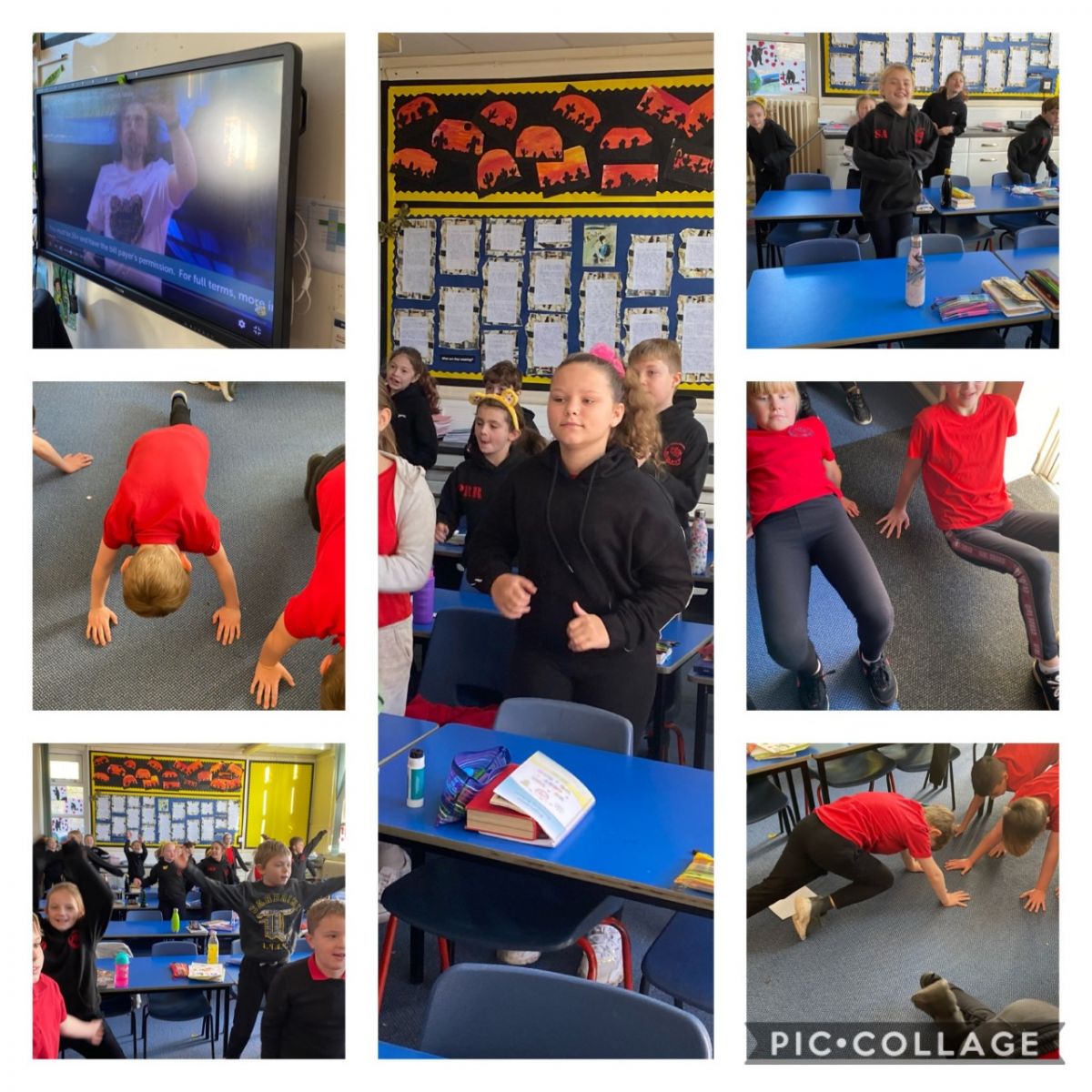 The children used the text, The War of the Worlds to write an account as if they were there when the world was being attacked by the tripods. The two pieces of writing below show the language, grammar, and punctuation that the children are using and how they are becoming talented and imaginative writers. 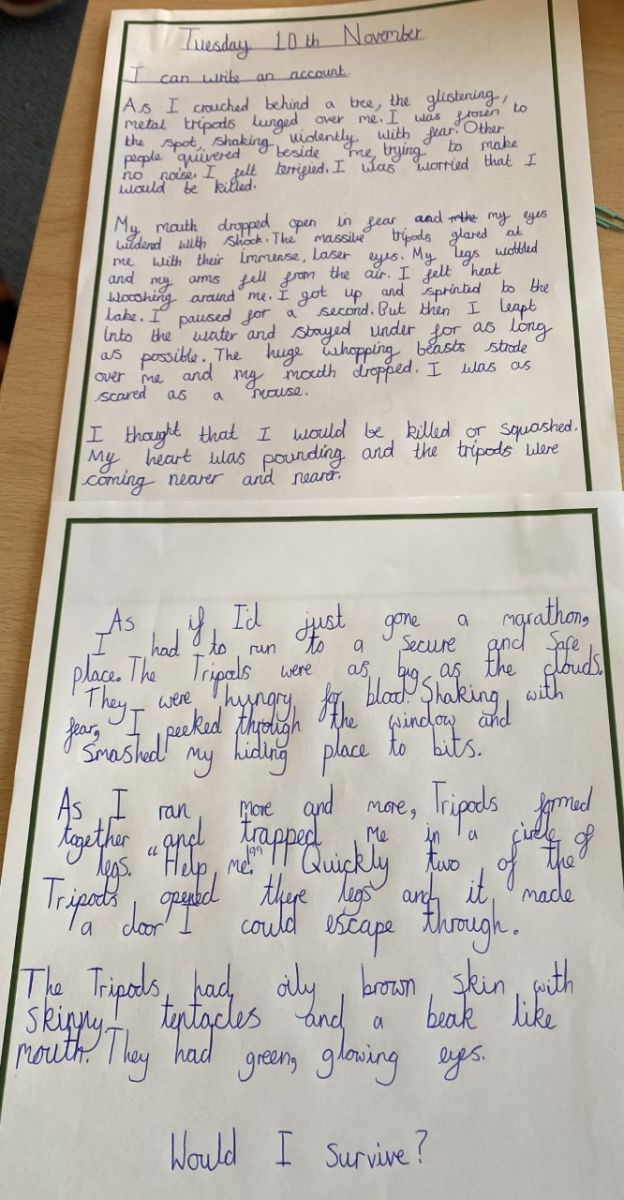 We stopped everything for a two-minute silence on Wednesday and used our Art skills to create these poignant paintings. 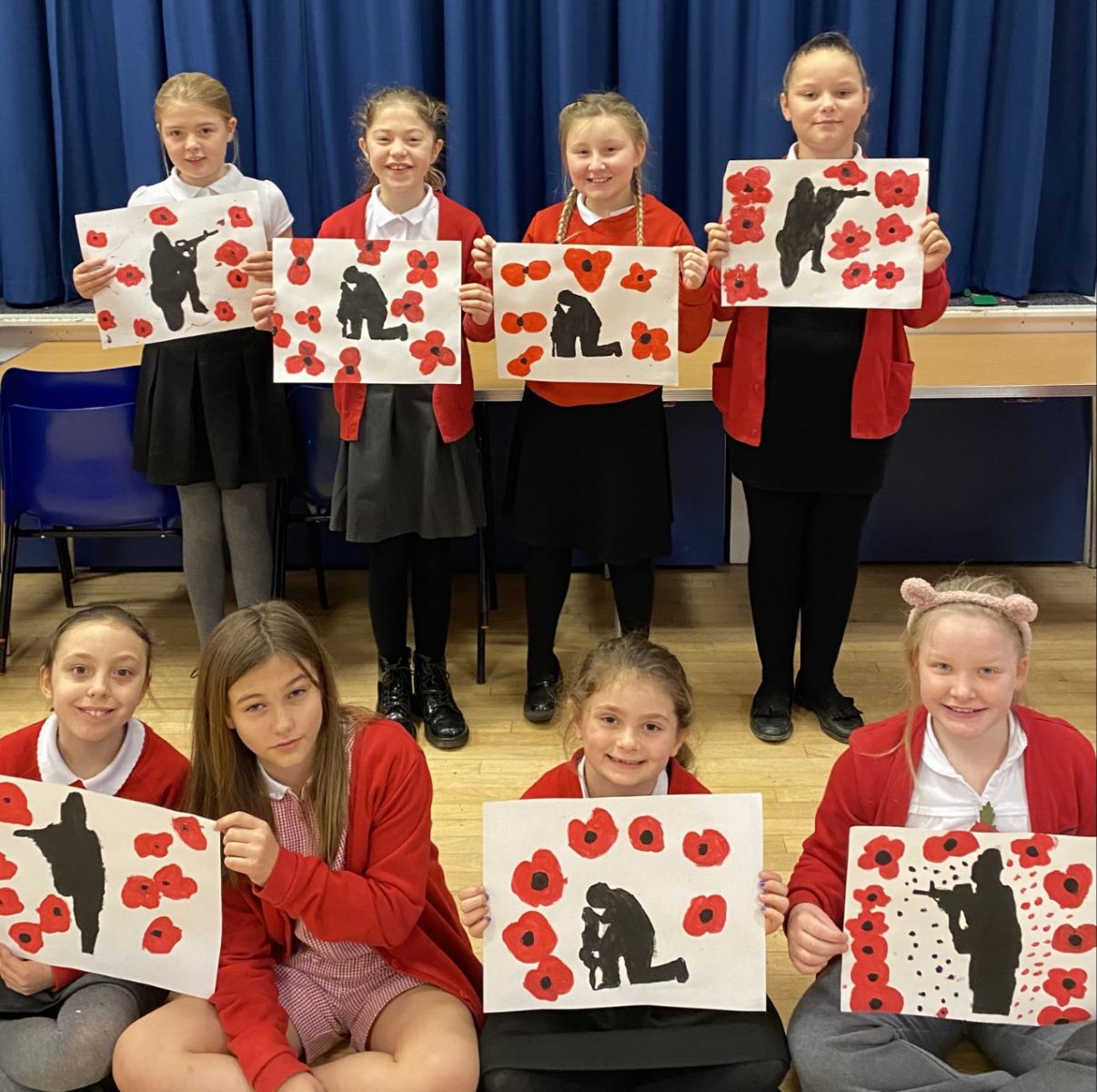 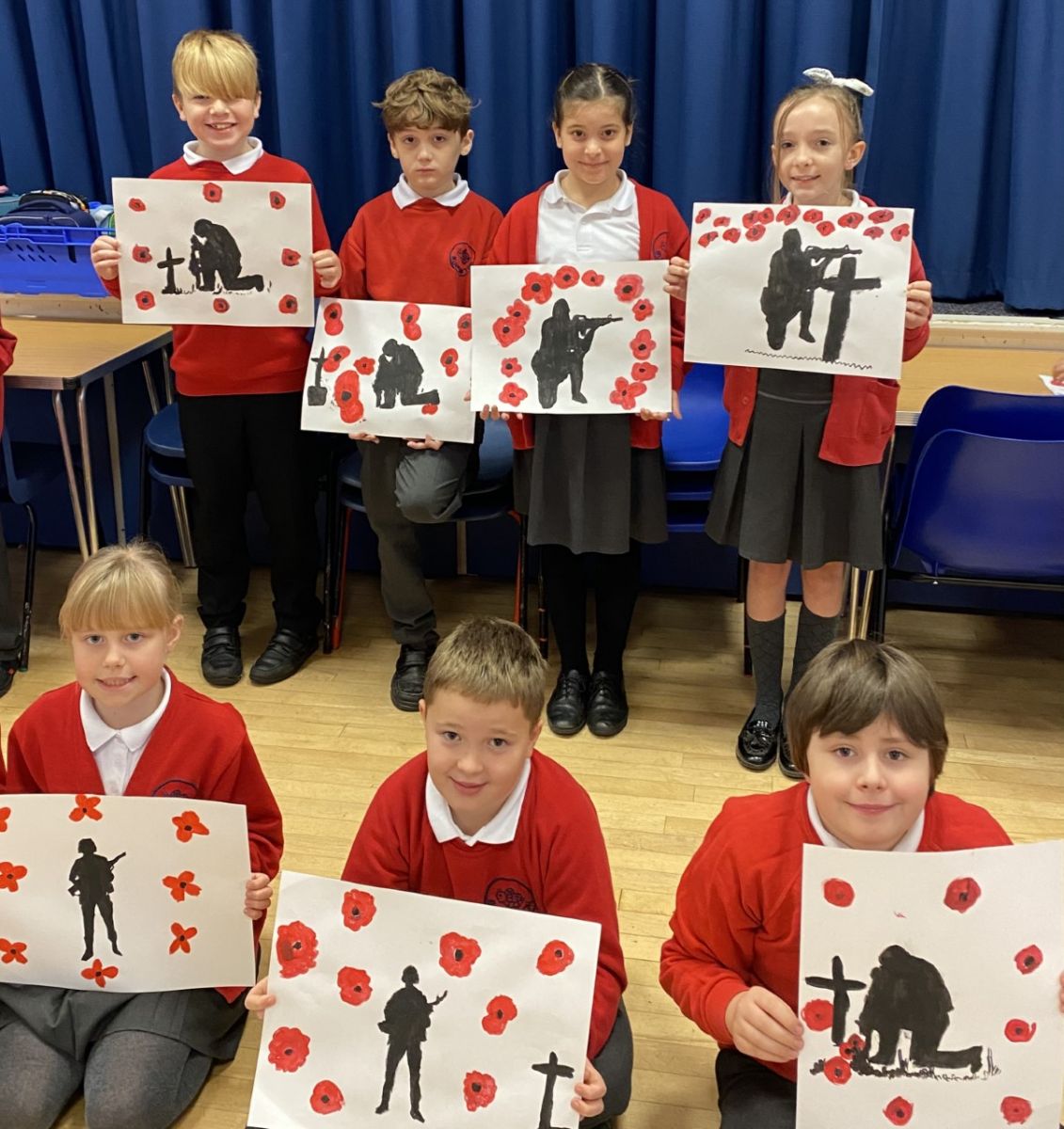 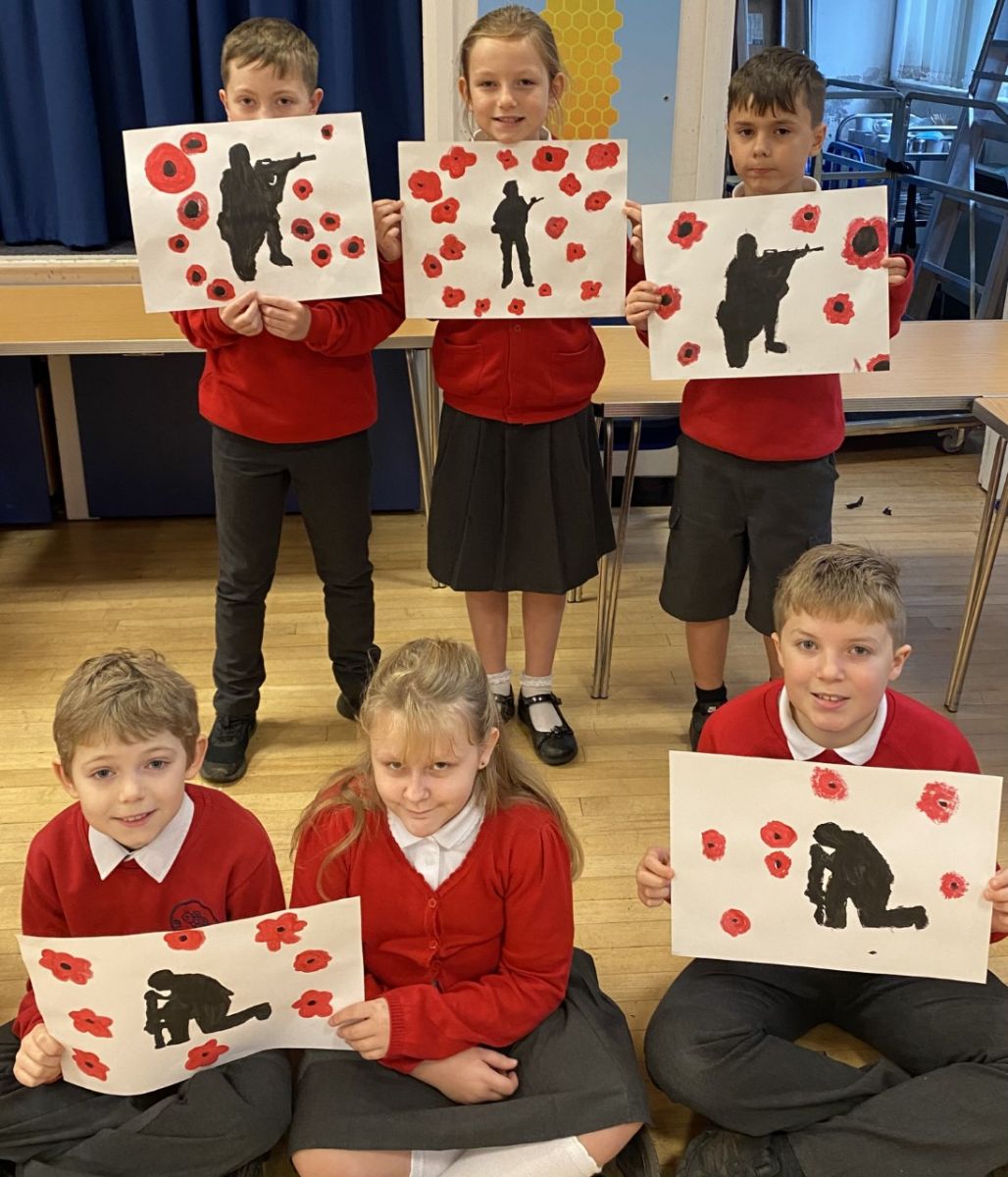 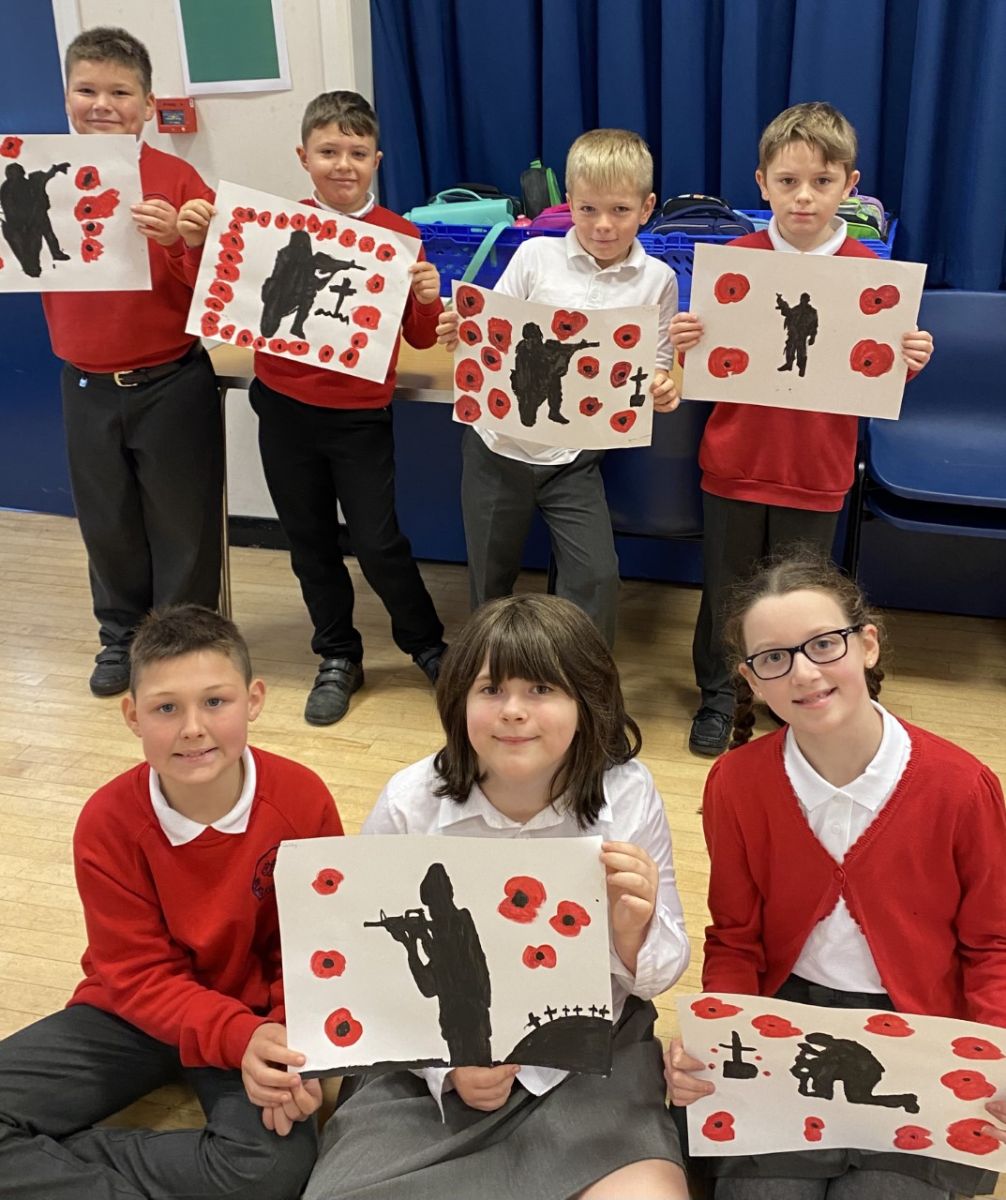 We have started to read the text The War of the Worlds by H.G Wells. 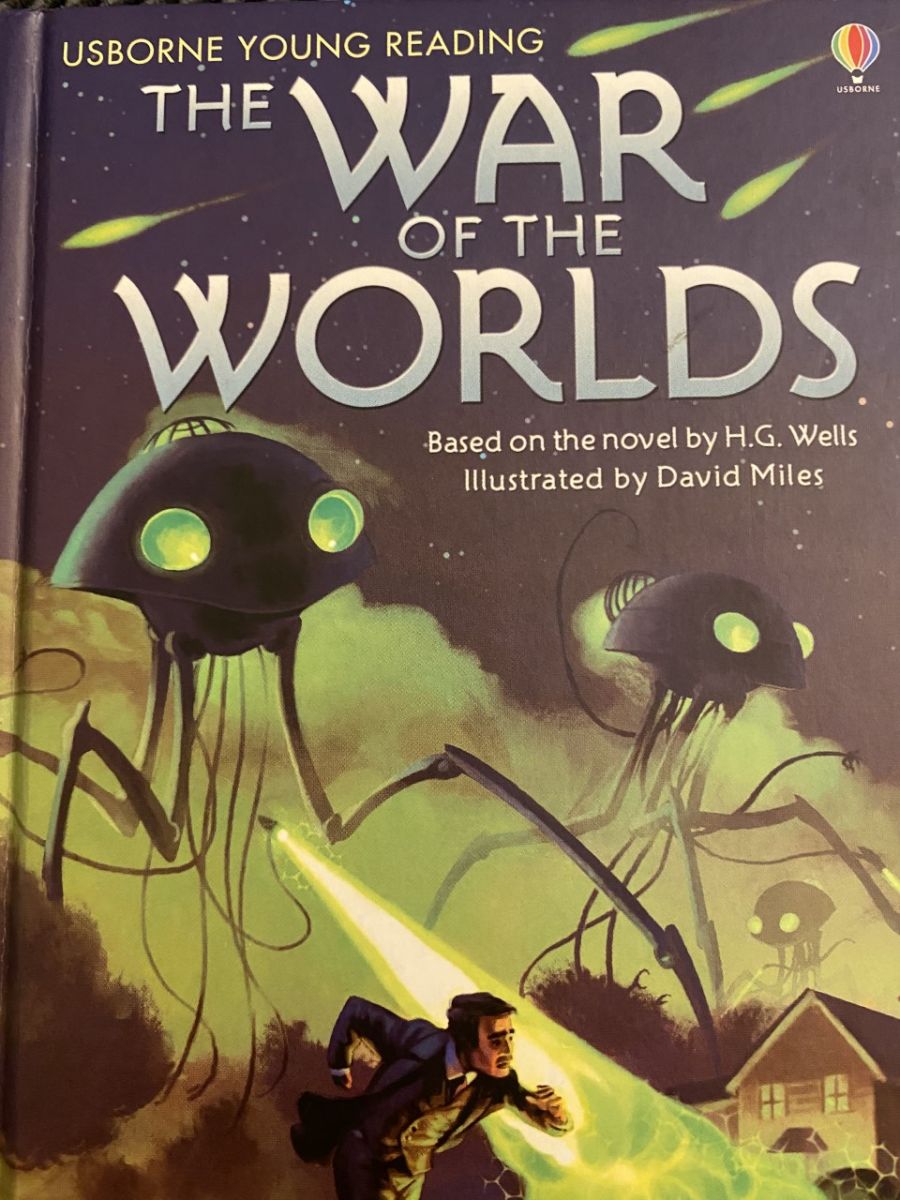 In Literacy the children were immersed in the text, using illustrations to predict what it was about. They have also used online and paper dictionaries to find out the definition of words, drawn a tripod martian from the evidence in the text, and wrote a character description of the tripod. 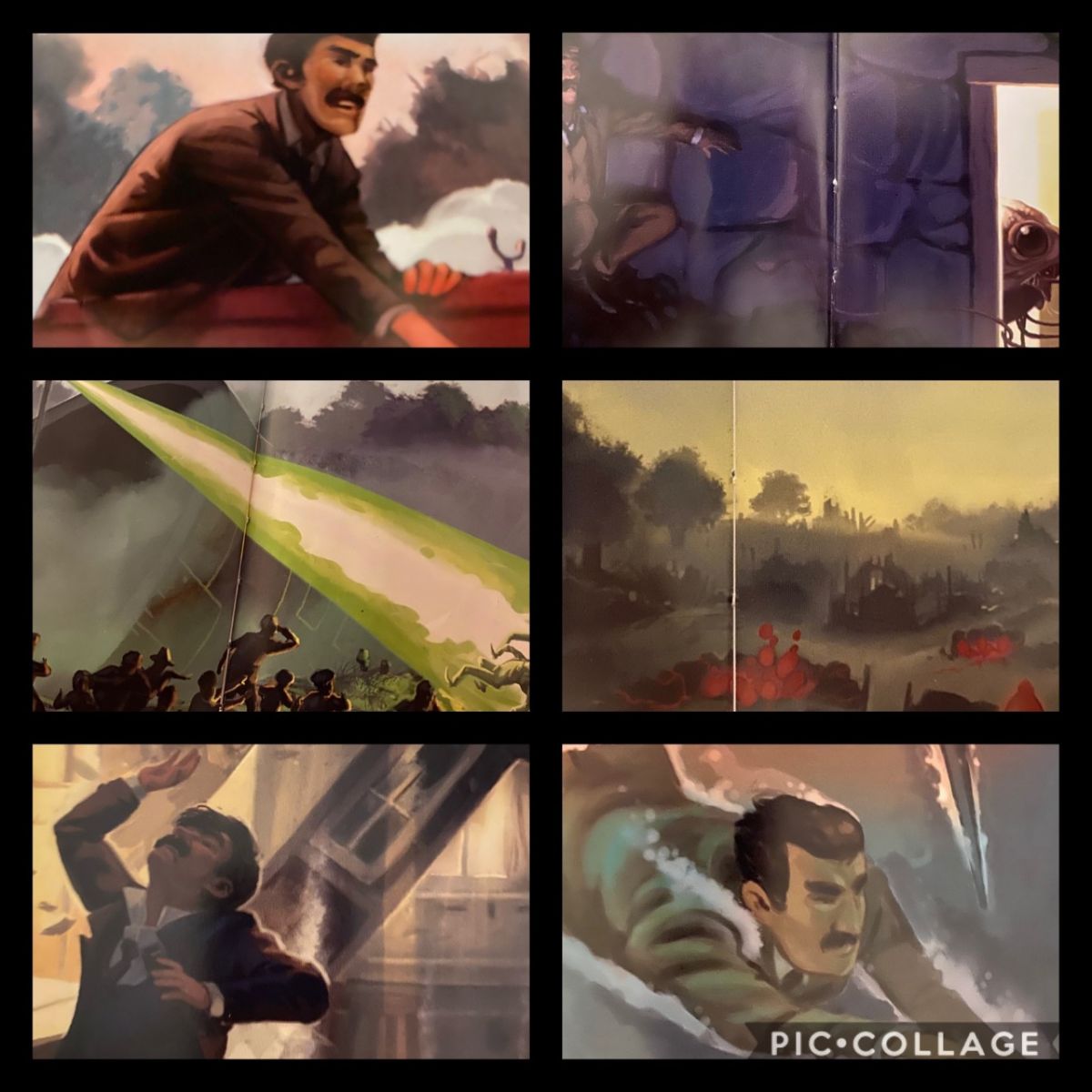 In Maths, we have continued with addition and subtraction and statistics. We focussed on line graphs this week and interpreting the data in a variety of ways.

In Science, Mrs Lwin planned and led the teaching. The class made their own sundials, using compasses to find North and a torch to cast their shadow. Ask your child three facts about sundials. 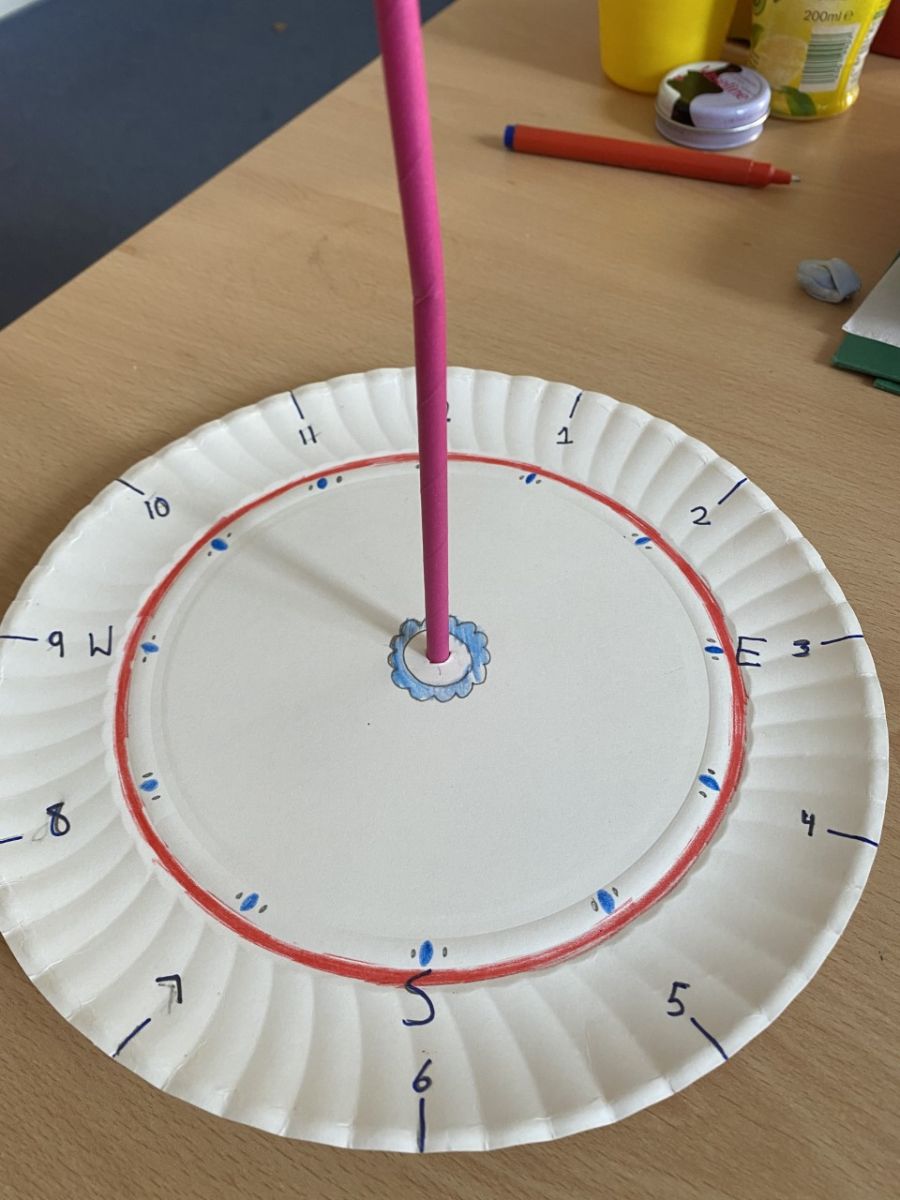 Thank you to the pupils who have completed some research at home this week. These are: Imogen, Alice, Dougie, and Lucian.

In Literacy, we completed our work using the text The Promise and will move onto the classic War of the Worlds by H.G Wells after half term. The pupils wrote some fantastic characterizations. I was extremely happy to see the children using fronted adverbials, alliteration, personification, adjectives, and some subordinated clauses. Well done Year 5!

In Maths, we have some pupils working on Addition and Subtraction and some have moved on to Statistics. They have enjoyed this but found line graphs with varying numbered axis tricky.

In Science, we have almost completed the topic of Earth and Space. This week the children investigated shadows and when shadows are at their longest and shortest. They discussed the variables when carrying out the experiment and how these could affect their results. 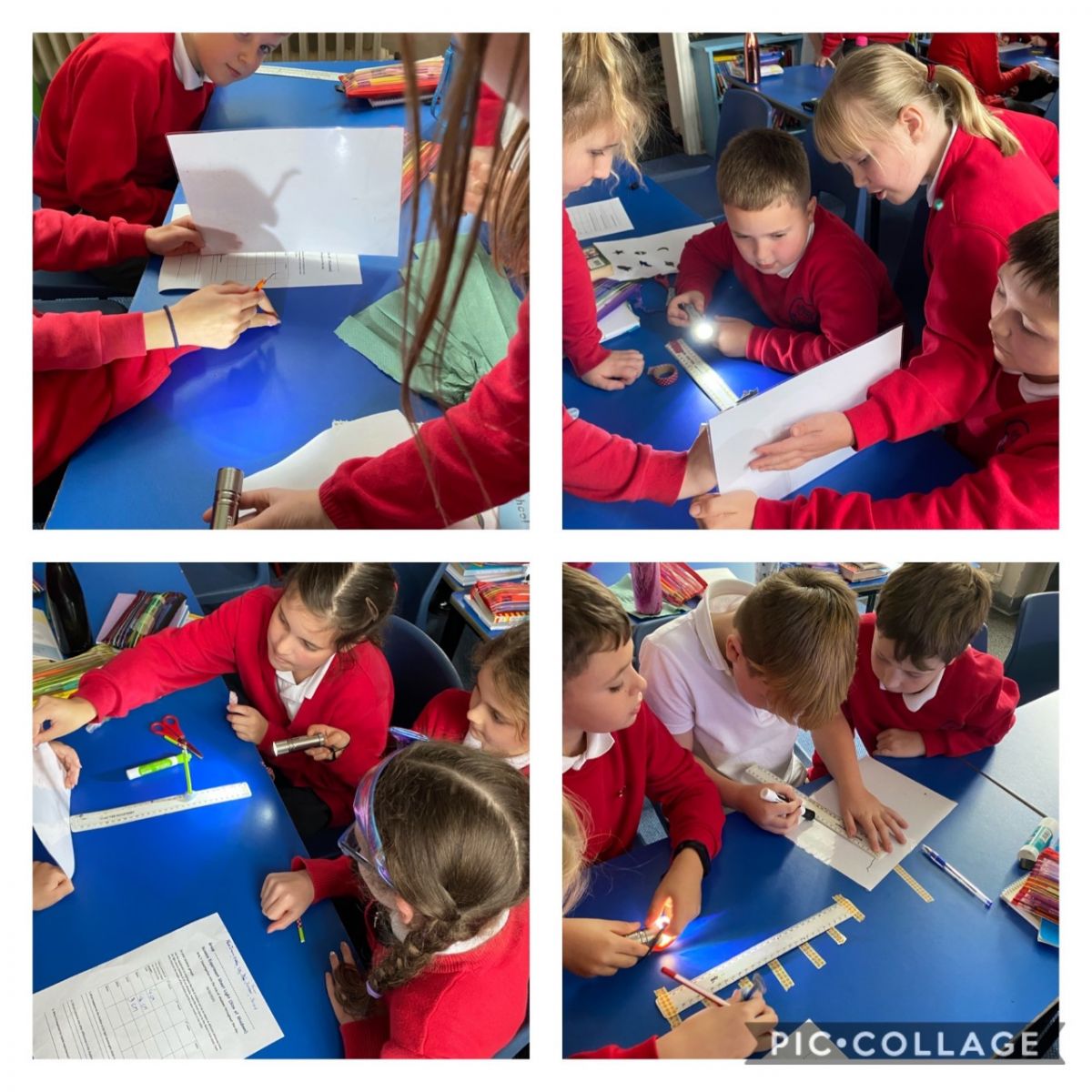 Some of the pupils have researched Earth and Space at home, creating posters, fact files, and powerpoints. Bobby worked with his Grandad and presented a PowerPoint to the class. It was outstanding! 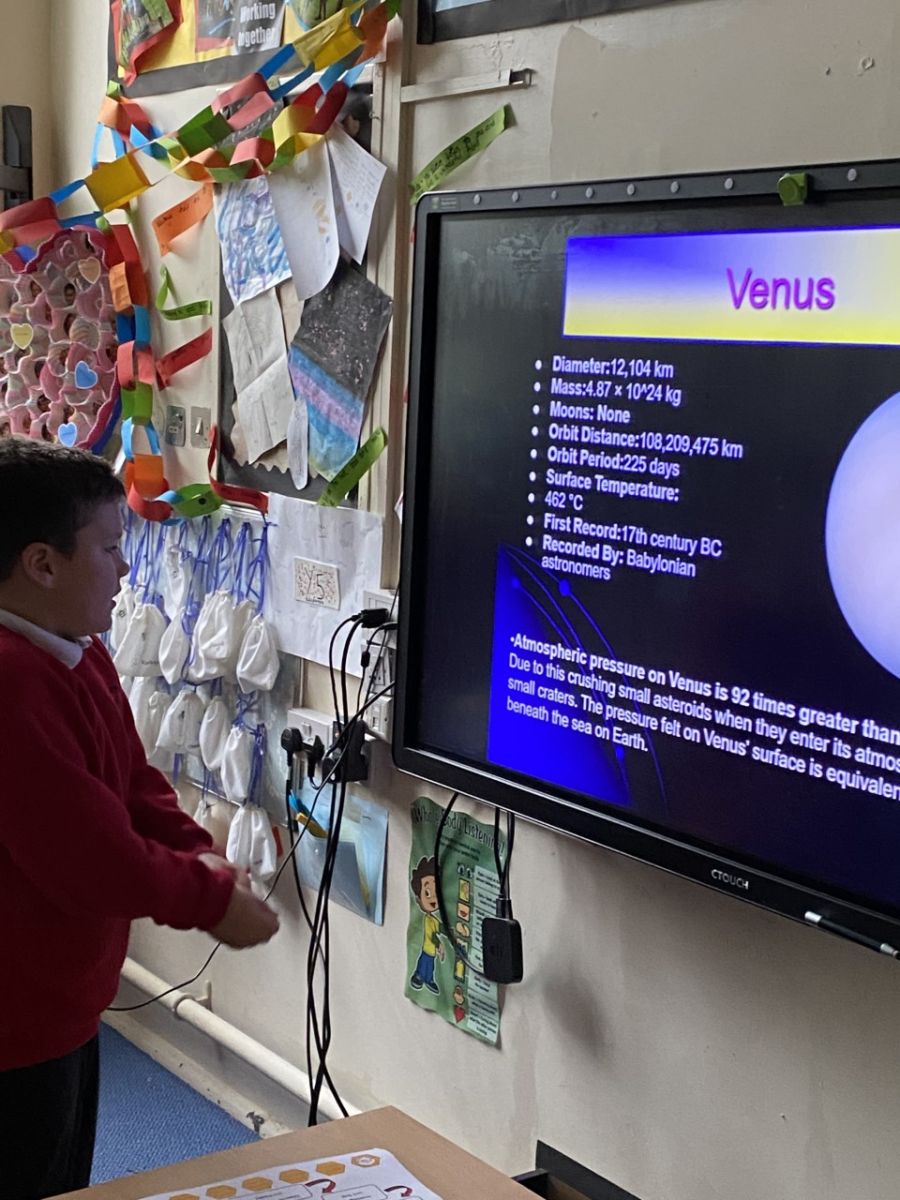 The class began their Art, looking at the skills used in drawing. They used their pencils to try out the different skills, then use them to draw extreme weather. 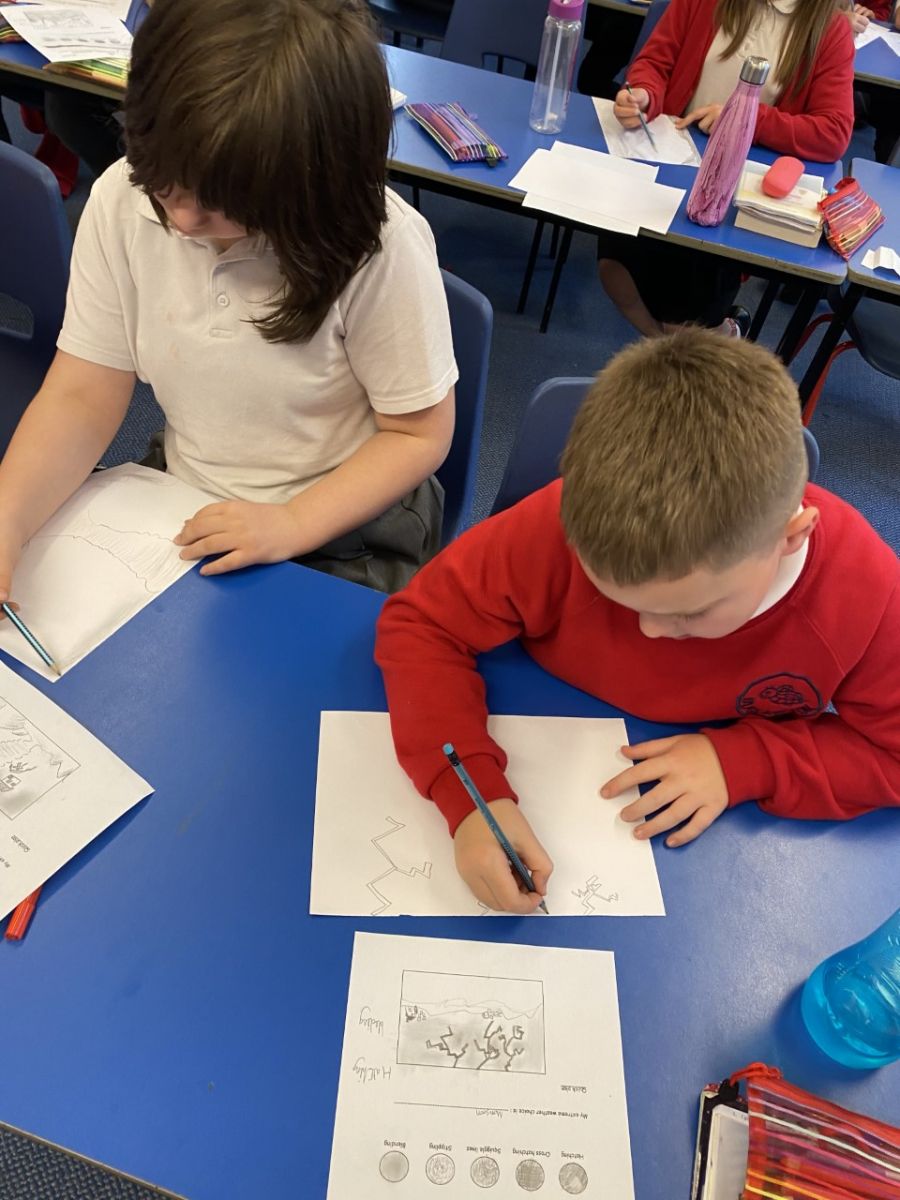 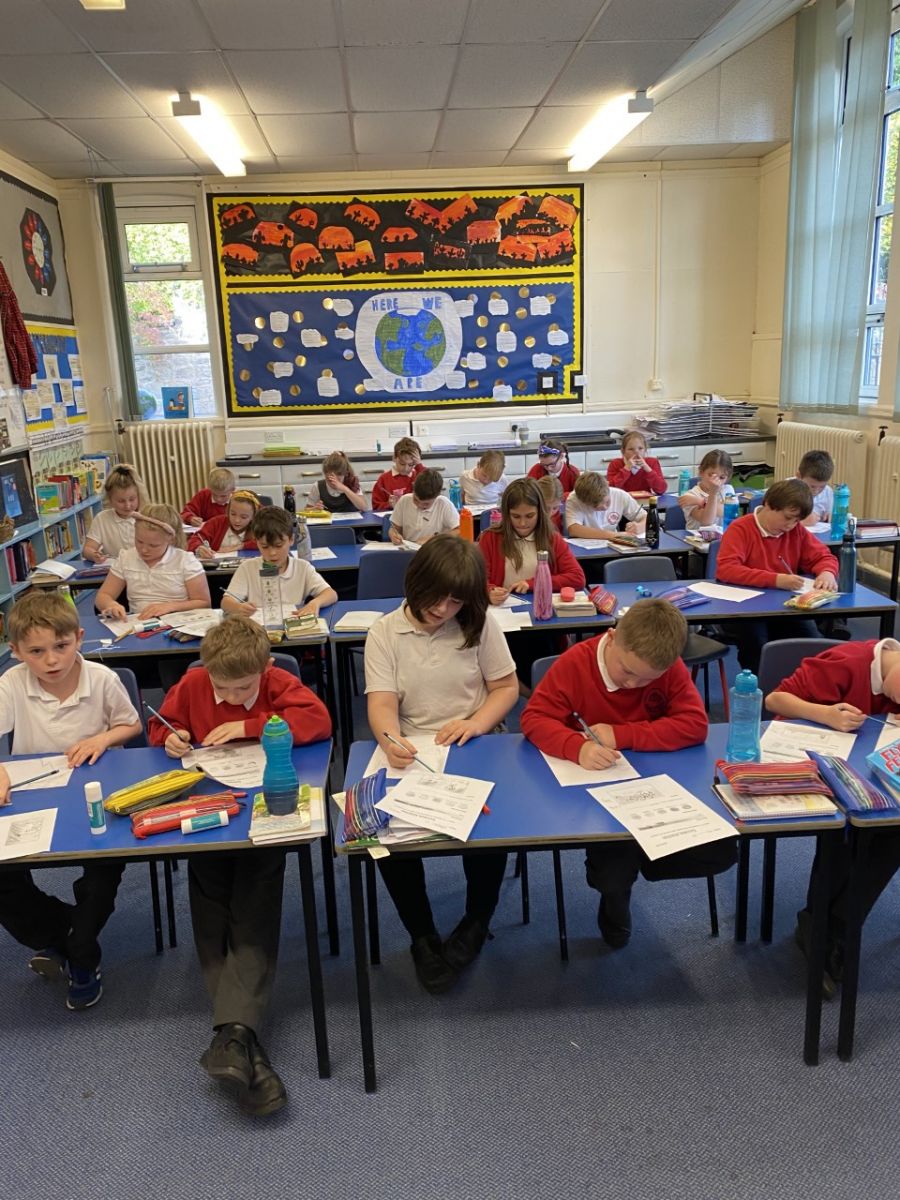 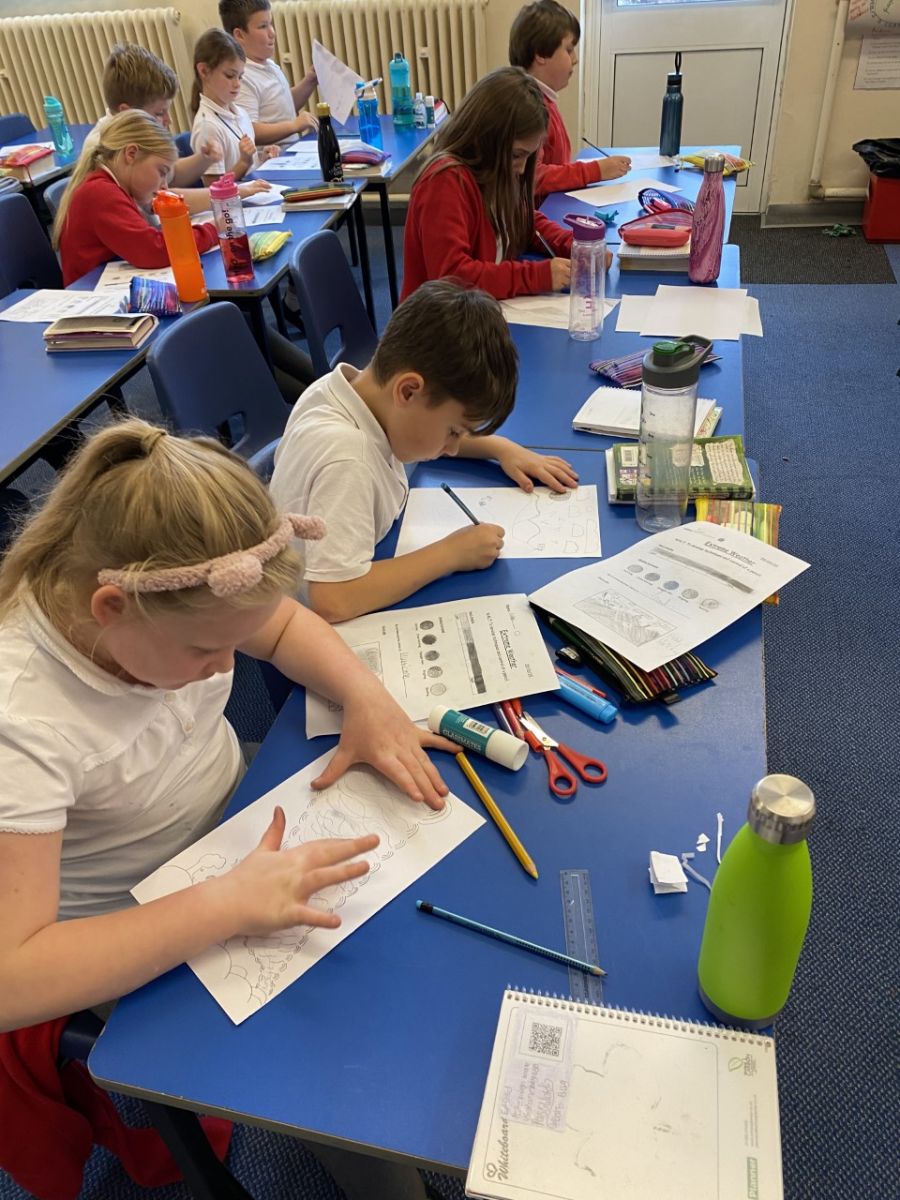 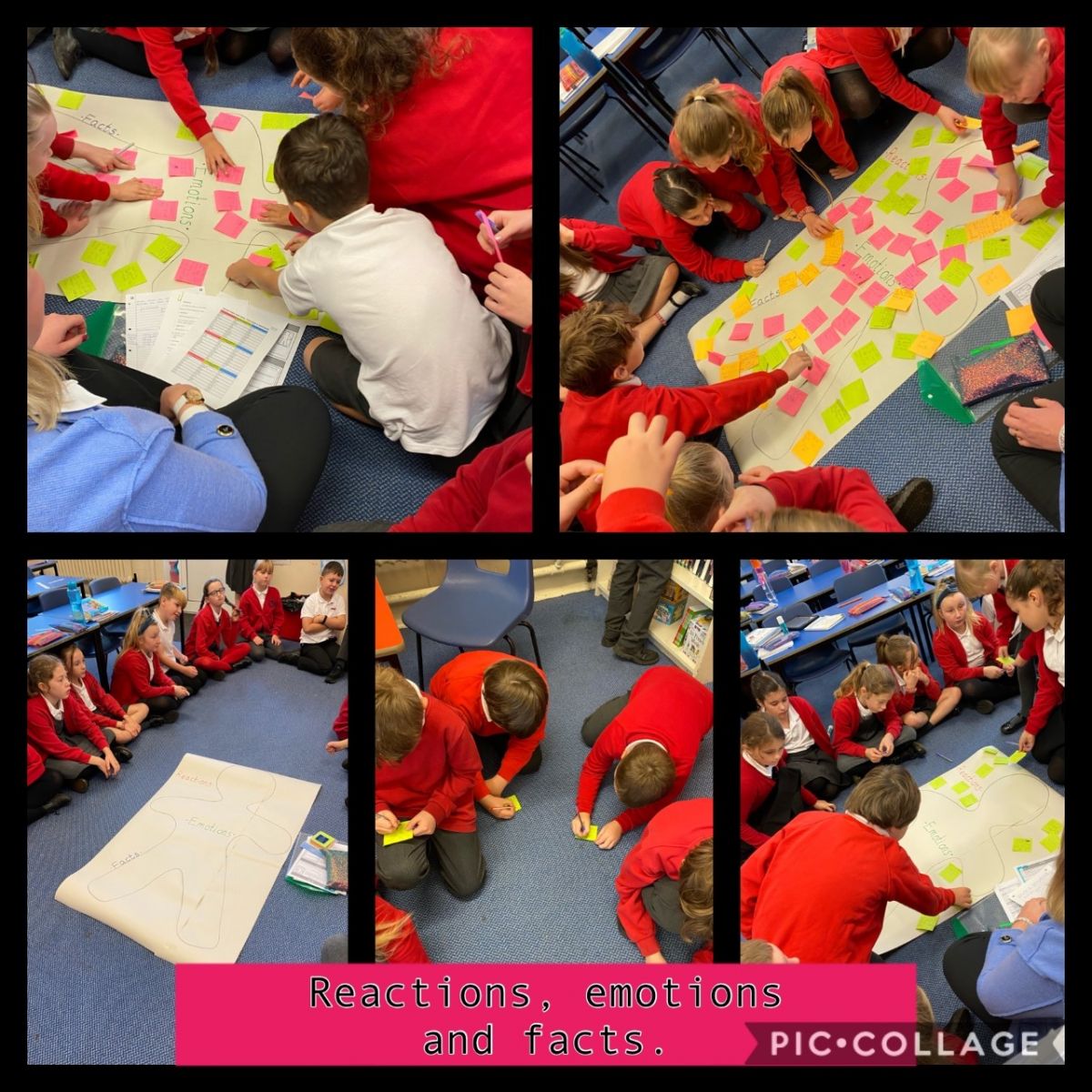 In Literacy, the pupils are planning ready to create a descriptive piece of writing next week using the text, The Promise. The pupils had a large outline of a body where they added post it notes focusing on the characters' reactions, emotions, and facts that we know about them.

In Maths we have continued to look at addition and subtraction, by rounding up or down to estimate. 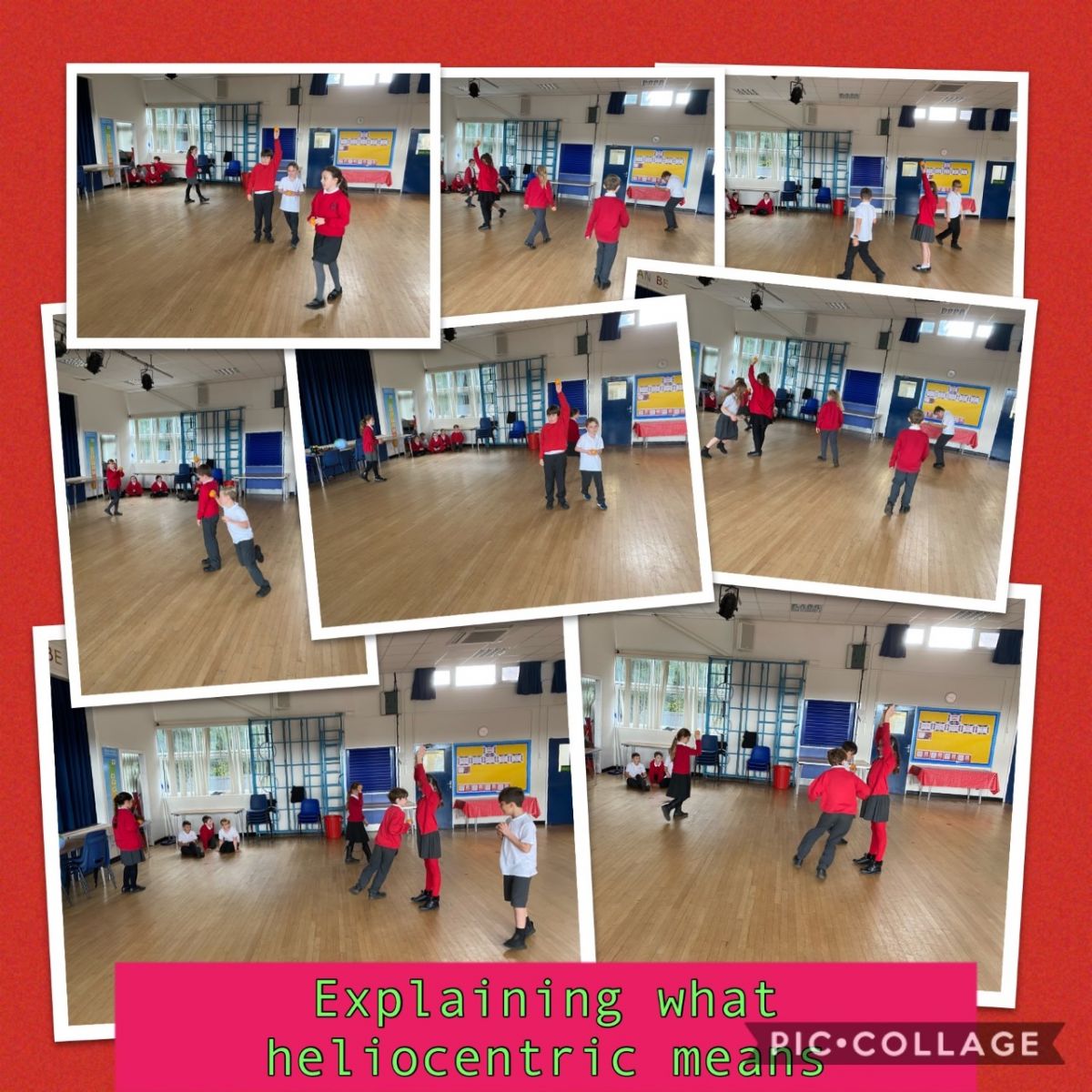 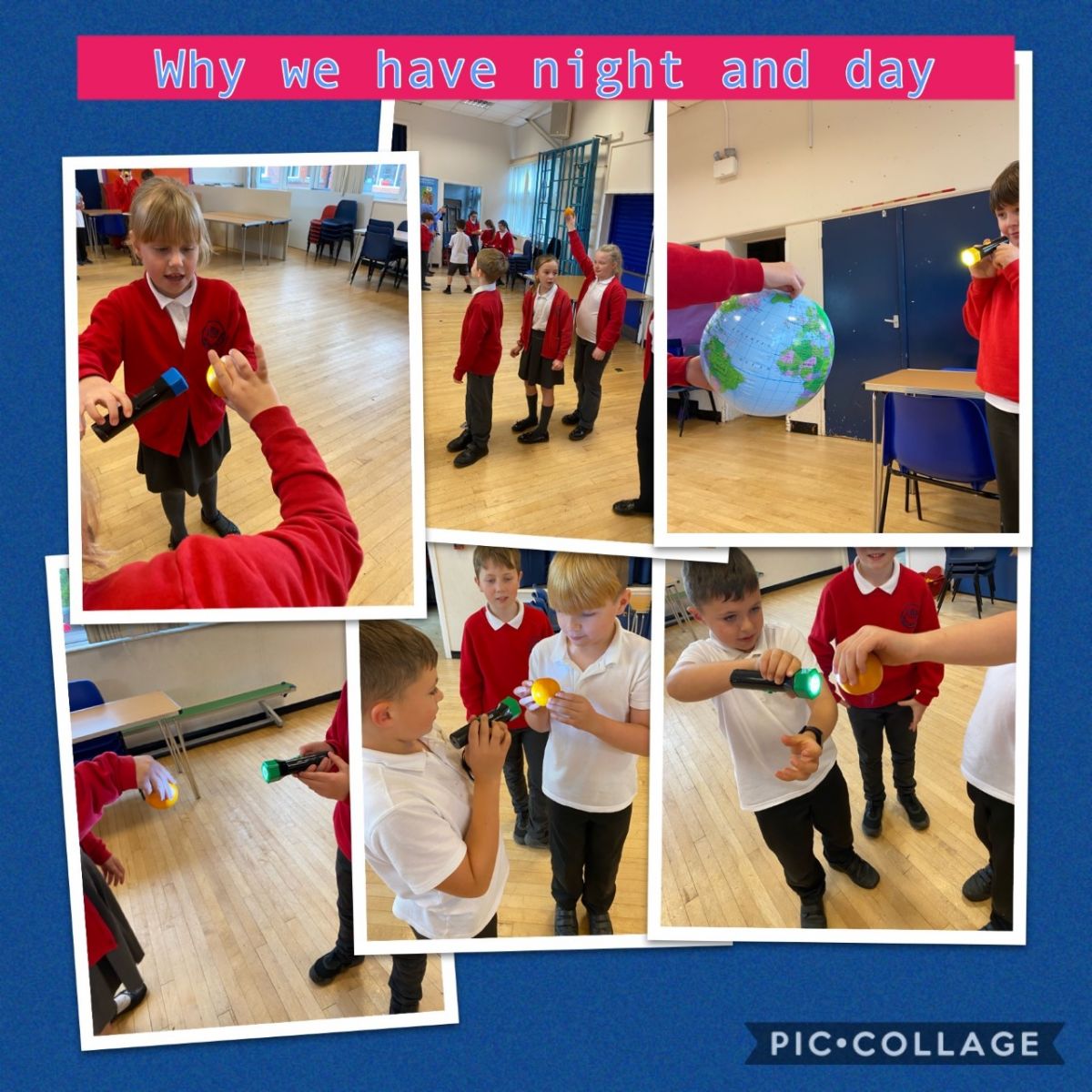 In Science, we have been working in our groups to test out theories, understand what the heliocentric model is, look at the speeds and distances of planets from the sun and explain why we have night and day.

A HUGE thank you to all who contributed to the Year 5 Harvest Box. We had everything on the list and more! 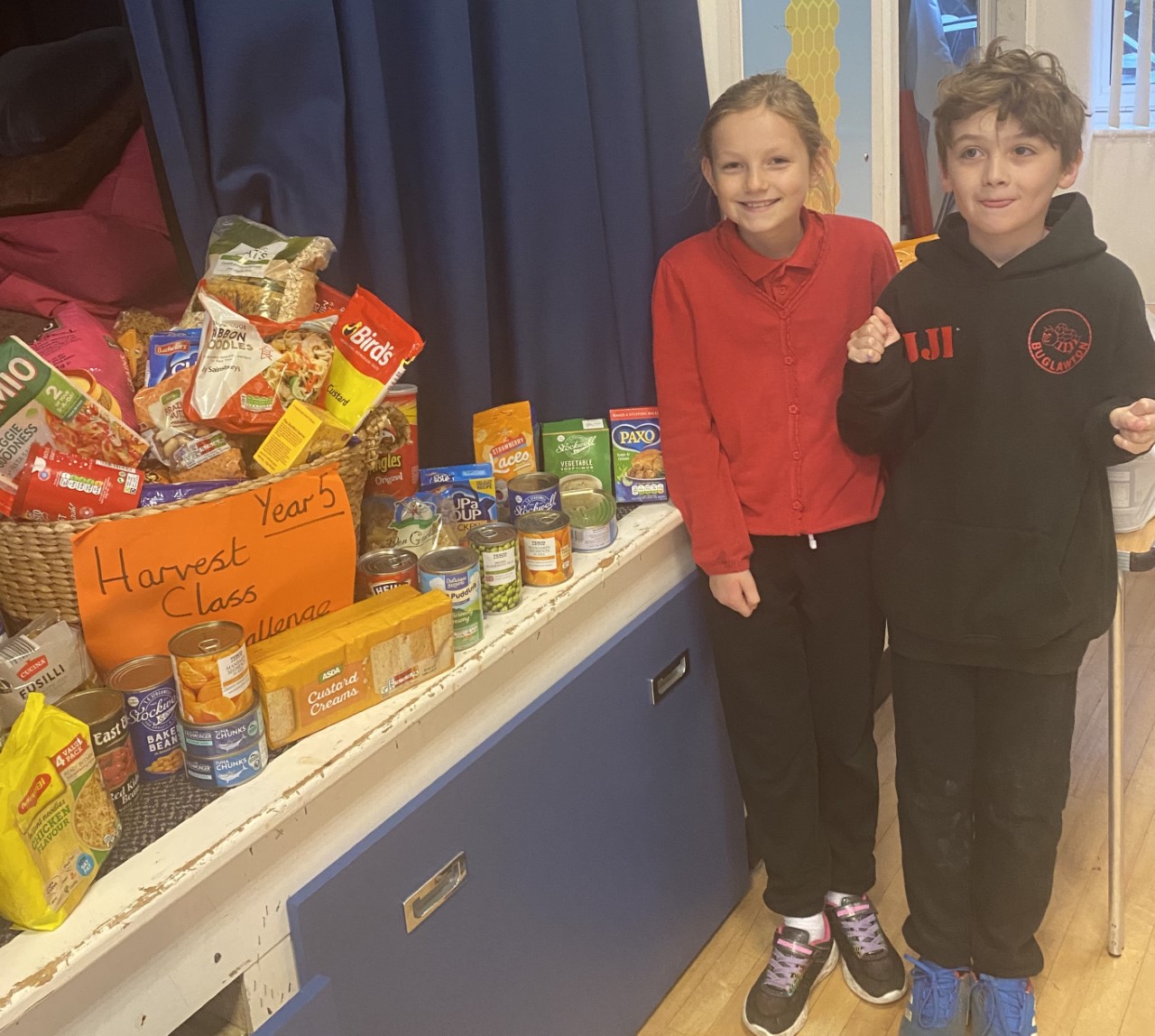 We continue in Numeracy with Addition and Subtraction, but our focus had been on subtraction. We have begun to exchange although we are finding this tricky and needs plenty of practice!

We have Maths grids that we use daily and these focus on key skills for Year 5. We are improving daily with these. 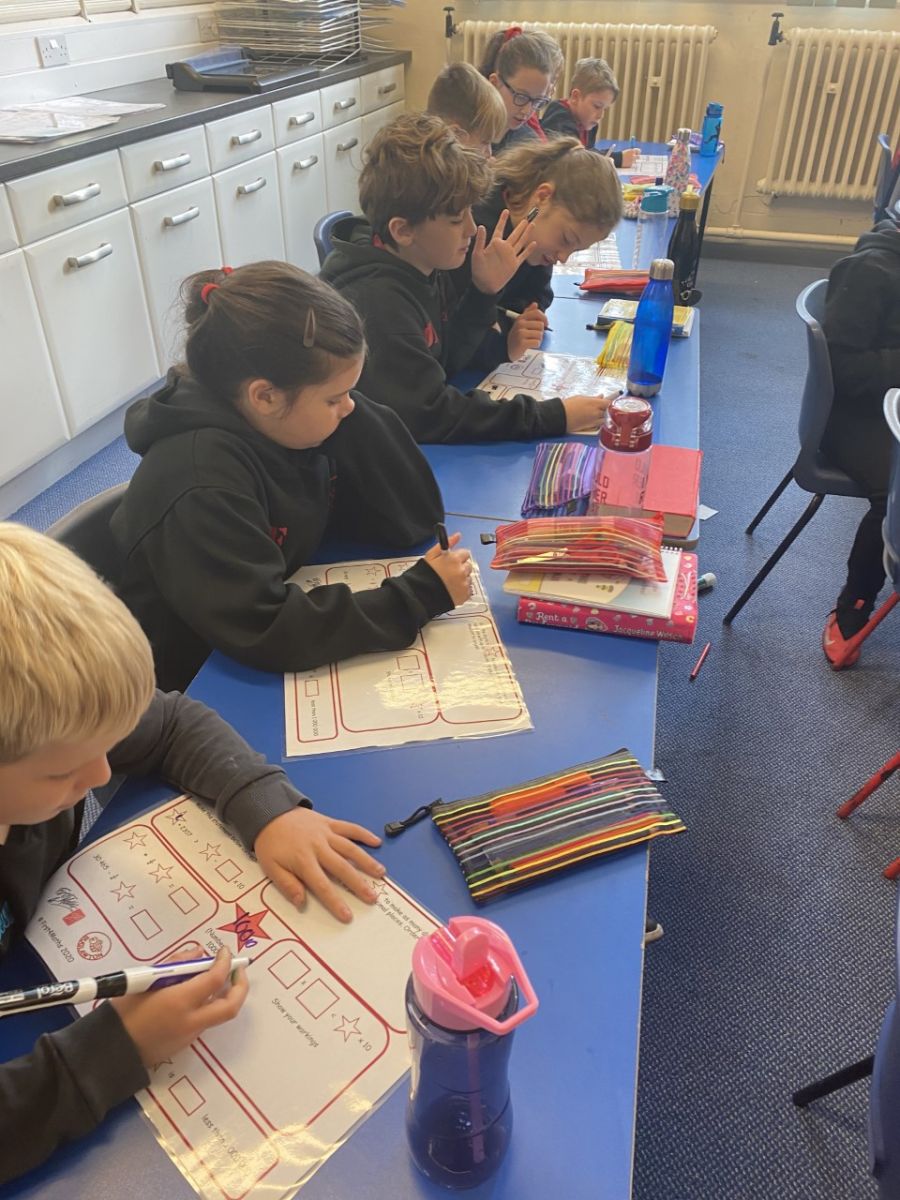 In Literacy, we used Drama to create feelings and emotions relating to the main character in the story. We also looked at the vocabulary used in the text and what effect it had on the reader. Next week we will begin to analyse, plan, and write a description of a character.

In Science, we have been looking at Scientists from the past and evidence that they provided to see if the solar system was heliocentric or geocentric. Ask your child what they know by these terms.

In Numeracy, we have begun to look at Addition and Subtraction. We have been looking at addition and exchanging tens, hundreds and thousands. We have been focussing on using the column method to do this.

In Literacy, we have a new text The Promise. We have become immersed in the text with the use of props: a bag, a checked shirt, acorns and the words: hate, mean and ugly. What do they mean? 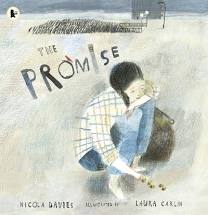 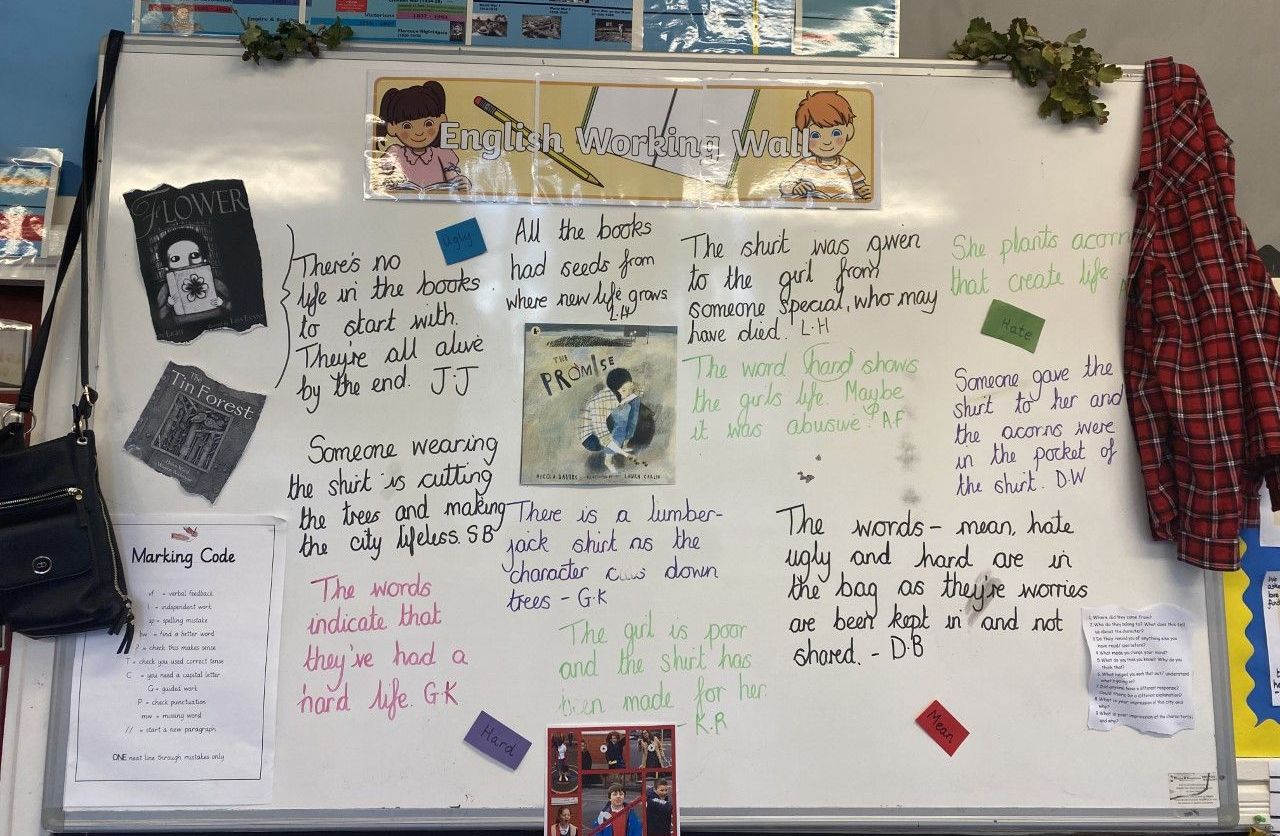 This is our working wall in our class. It is added to regularly.

This week has been an assessment week, so we have been looking at any gaps in learning to aid future planning. The children all worked hard and were focused to do these.

In Numeracy, we have looked at 'Rounding to a million'. The children have found these tricky and will continue to work on these next week.

In Literacy, we have come to the end of our text 'Here we are' and have written some beautiful poems which will be displayed in the corridor by the Year 5 classroom. 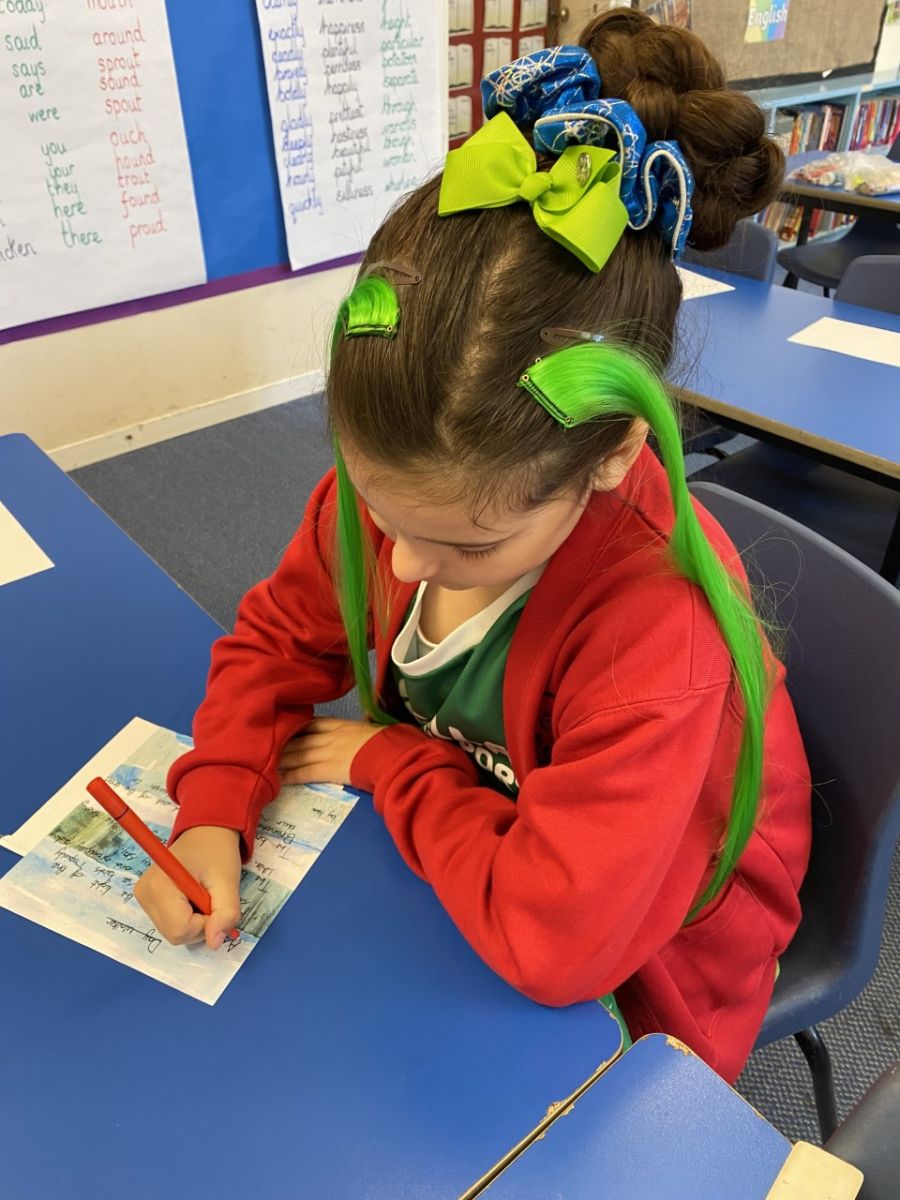 In Science we have looked at the planets in the Solar system, finding out their names and facts.

In Numeracy, we have been using numbers to one million: adding and subtracting ones, tens, hundreds, thousands, and ten thousands.

In Literacy, we have continued to use the text Here We Are. We used a poem called the Night Walker to inspire us, and we have now written draft poems called The Day Walker. Next week, we will write them up and they will be displayed.

In Science, we have used evidence from the past to decide if the earth, sun, and moon were flat or spherical. Ask your child what they believe and make sure they use the word sphere or spherical.

Literacy: The text we are using is HERE WE ARE by Oliver Jeffers. This week we have looked at being back at school, our feelings about this, and thoughts for the future.

We have also looked at aspects of our world, writing poems about our favourite places, letters to people who are special to ourselves, and an email to M.P Fiona Bruce with suggestions to improve the environment.

We have started to focus on the oceans and researching a sea creature. We hope to complete these next week with television news broadcasts.

Our class spine text is called THE NOWHERE EMPORIUM by Ross MacKenzie. The text is literally magic and we are mesmorised by it.

We are focussing on Place Value and have so far revised ones, tens, hundreds, thousands and ten thousands, and rounding numbers to the nearest ten, hundred or thousand.

We have made HOPE jars for the future that are displayed in the Year 5 classroom and have individual compliments bags. Each week the pupils place notes to each other in the bag and then read them on a Friday. The smiles on their faces were wonderful to see! 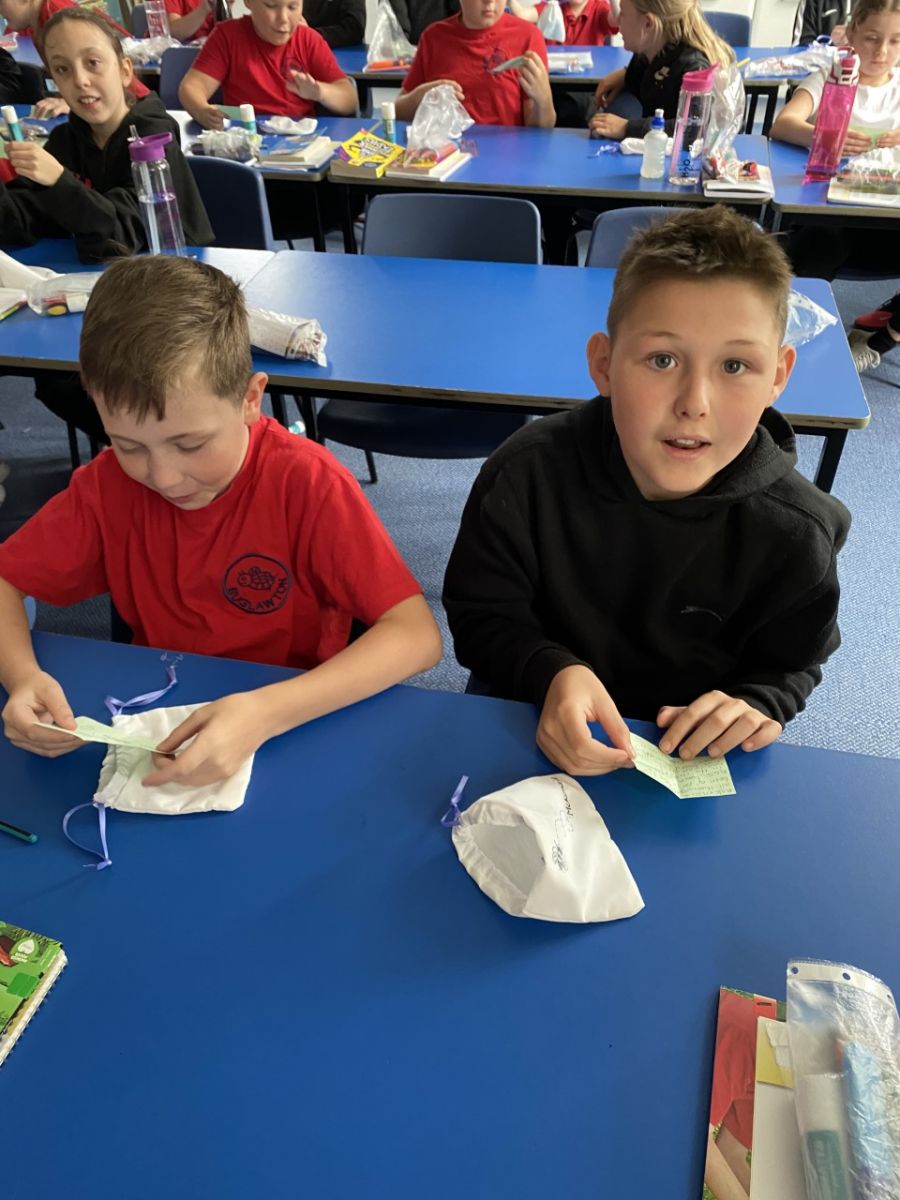 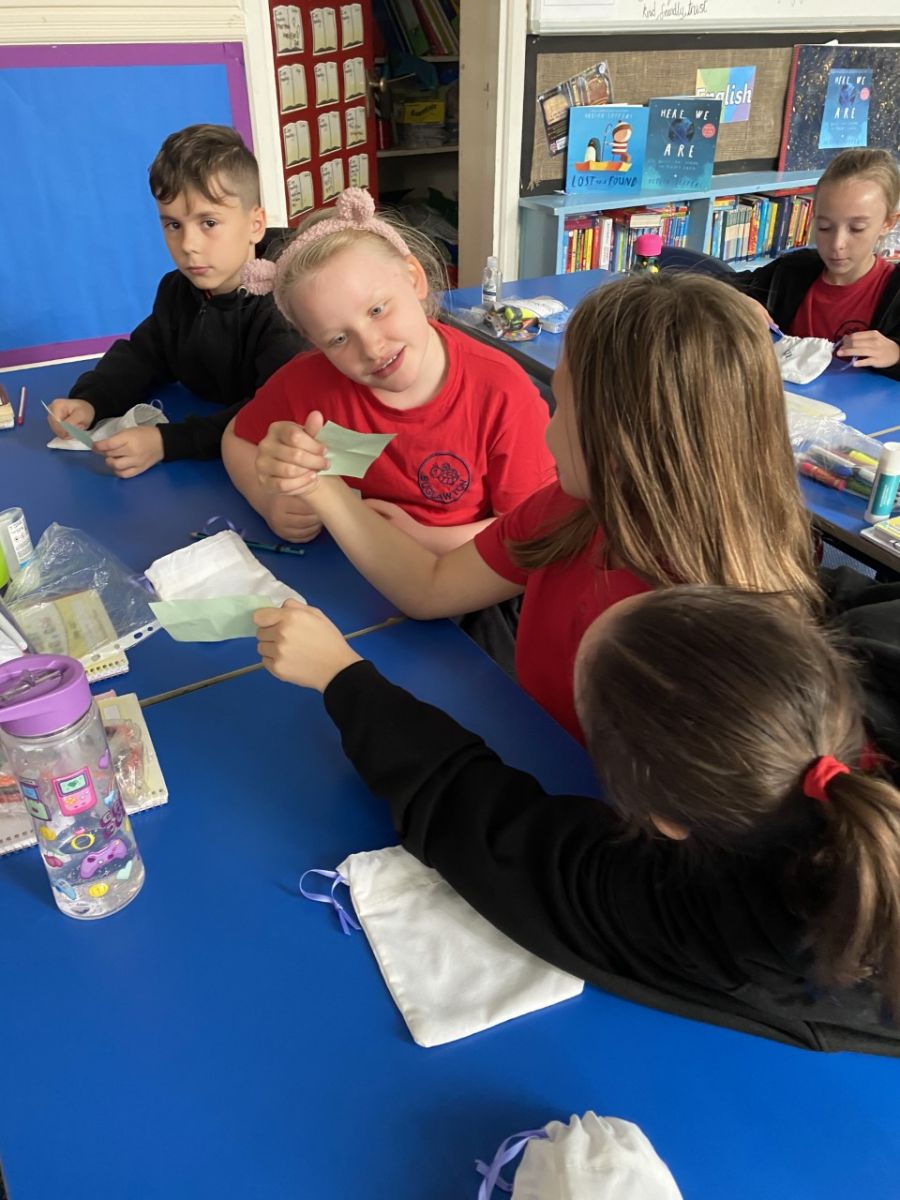 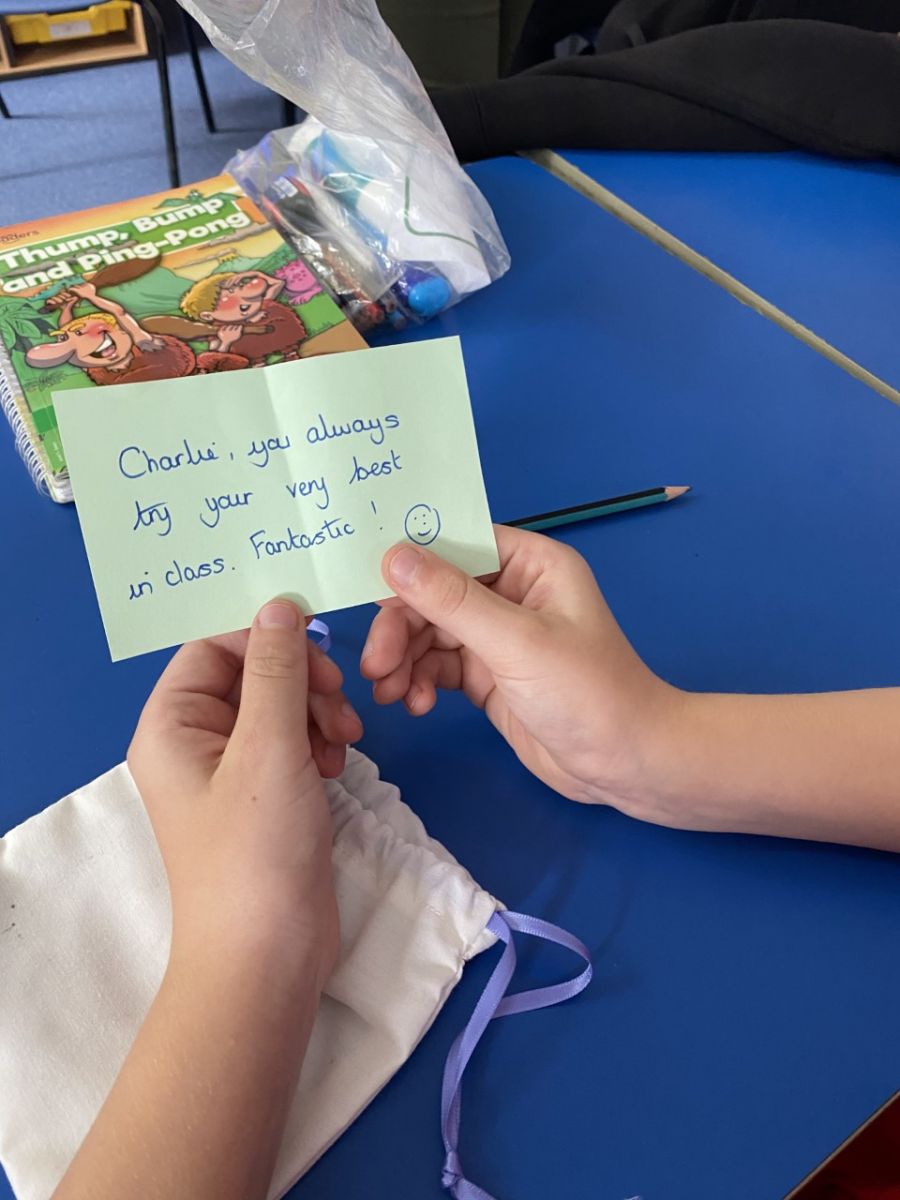 Things you need to know

Children will have PE every Friday. On this day, please come to school in your PE Kits ready to go! No other change of clothes is necessary.

During Autumn Term, we will be running a more focussed curriculum, with lots of Maths, Reading,  and Writing as well as Science, PE, Computing, and lots of PSHE activities.

There are no Calendar items to display